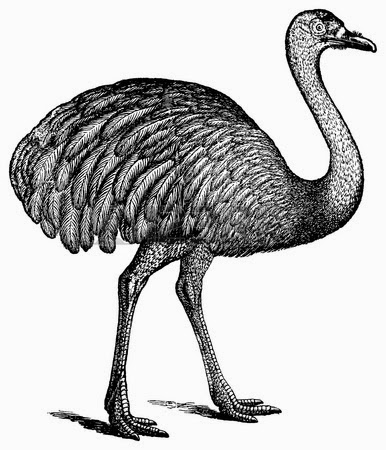 The thought of ostrich farms in Anaheim sounds quite odd to me, but history records prove that it did happen. In fact, there were quite a few different people who had ostrich farms within Anaheim and Orange County in the late 1800s.

Starting around 1883, a man known as Dr. C.J. Sketchley started the very first ostrich farm in Anaheim, California, on a 640 acre ranch that once belonged to Abel Stearns. A native of Cape Town, South Africa, Sketchley was the first to bring ostriches to California.

They brought the first 21 birds to the farm from Africa. None of the birds were lost or died on the trip over, except for one female who killed her mate. Being that ostriches were so foreign to locals, Dr. Sketchley's farm became a magnet for hundreds of people daily, showing up uninvited to the farm to get a look at these enormous, flightless birds. Soon after opening the farm, Dr. Sketchley grew frustrated with the constant impositions that visitors made to his business. Constantly worrying about visitors and dogs coming on to his property and annoying the birds, or attempting to steal the valuable feathers, he started to charge $ .50 per head which would be the equivalent today of about $12 per person to visit, hoping to get rid of visitors. Unfortunately, that didn't do much good. Being that feathers were worth so much at the time, people risked their own safety by sneaking onto Sketchley's property to pluck feathers off of the ostriches in order to sell them.


In an interview for the New York Times in October of 1883, Sketchley was quoted saying, "when you ask me what are the greatest drawbacks I have met with I must answer dogs and visitors,  and perhaps the visitors are the worst."  Eventually, Anaheim became too much for Sketchley so he moved to a farm just outside of Los Angeles, leased by G. J. Griffith.  Later a rail line from Los Angeles to the farm was put in, and Sketchley gave in to allow a tourist attraction along with his ostrich farm located where Griffith Park stands today.


Dr. Sketchley wasn't the only one who went into the Ostrich farming business either....

The next fellow to come to Anaheim with ostriches on his mind was Edward Atherton. Another fellow South African, just like Sketchley, Atherton was well experienced as an ostrich farmer.
Edward Atherton was born in Cape Town, South Africa on May 29, 1860, who was the son of Cape Town pioneer John Atherton, a native of Manchester, England.  His father, being business savvy, not only owned a farm of over 500 acres for grain, vineyards and stock, but he also owned two factories, one for distilling liquor and another for scouring wool.

"The History of Orange County" claims that in December of 1886,  Edward came to Anaheim to acquire the 21 birds that had originally came to Anaheim a few years earlier. I had originally assumed, given this exact number, this was Dr. Sketchley's original birds but it doesn't appear to be so. It also states that upon arriving, Atherton learned that the 21 birds had grown to 46, after breeding.

The book goes on to state the original 21 birds sent to Anaheim, came in 1882 after being in an exhibition in San Francisco in 1881. Then they were moved to Anaheim in 1882 by the California Ostrich Farming Company, managed by R.J. Northam.  Atherton eventually settled on a farm close to Fullerton and bought out Northam's interest in the business. Towards the end of his career in ostrich farming, he sold all but eight birds and kept most of his land for growing Valencia oranges and walnuts.   The wedding photo of Mr. Atherton and his wife can also be seen on the mural of the Chase Bank (fka Home Savings of America) at 101 S. Harbor Blvd on the corner of  Lincoln. 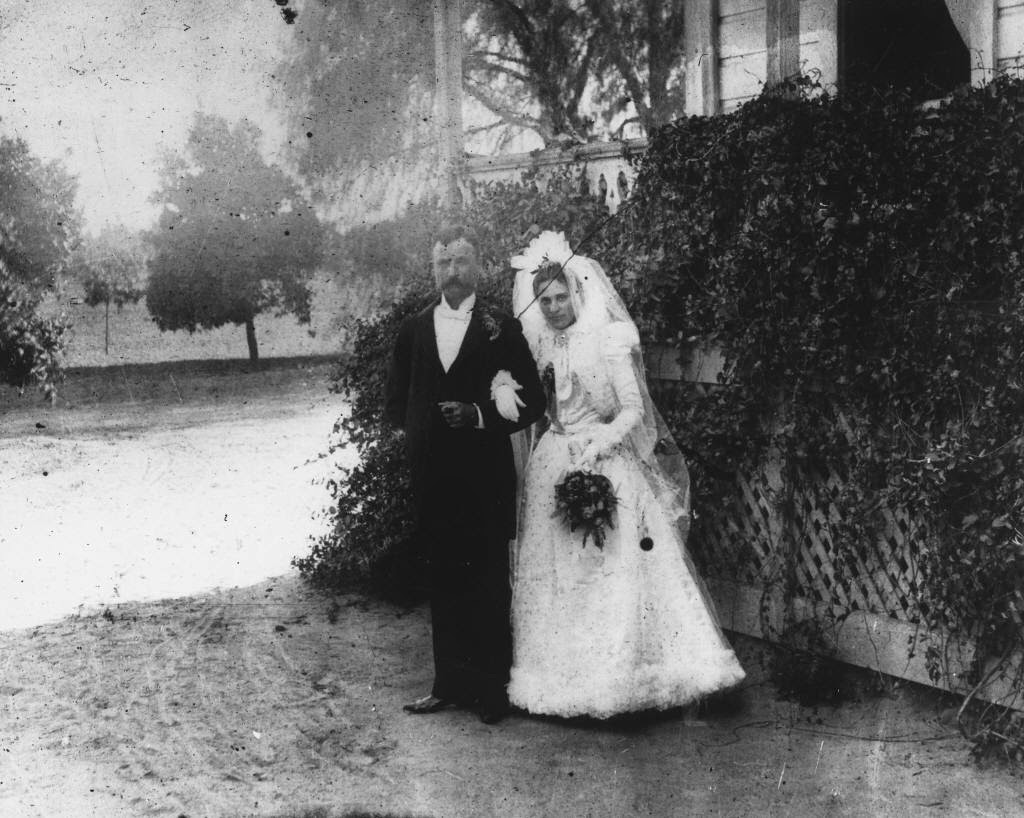 OSTRICH FARMER, EDWARD ATHERTON~ Born in Cape Town, South Africa on May 29, 1860. Edward Atherton came to California via Cape Horn. In 1886, Edward came to Anaheim and became one of the first Ostrich Farmers. He married Carolina Sellinger in 1897 and they had three children: Malcolm, Miranda and Dalton.

Although ostriches are not well tempered birds, they seemed to be useful for different things, such as delivering mail. Well, not exactly, but at least pulling the mail cart to deliver the mail! Honestly, I don't know how anyone managed to deal with these birds, as I had my own run in with an ostrich when I was just a teenager and I thought it was going to attack me. Let me just say, calling these birds grumpy is an understatement. They are very violent and prone to kicking anything they see. Somehow or another, they were able to use them successfully around town. 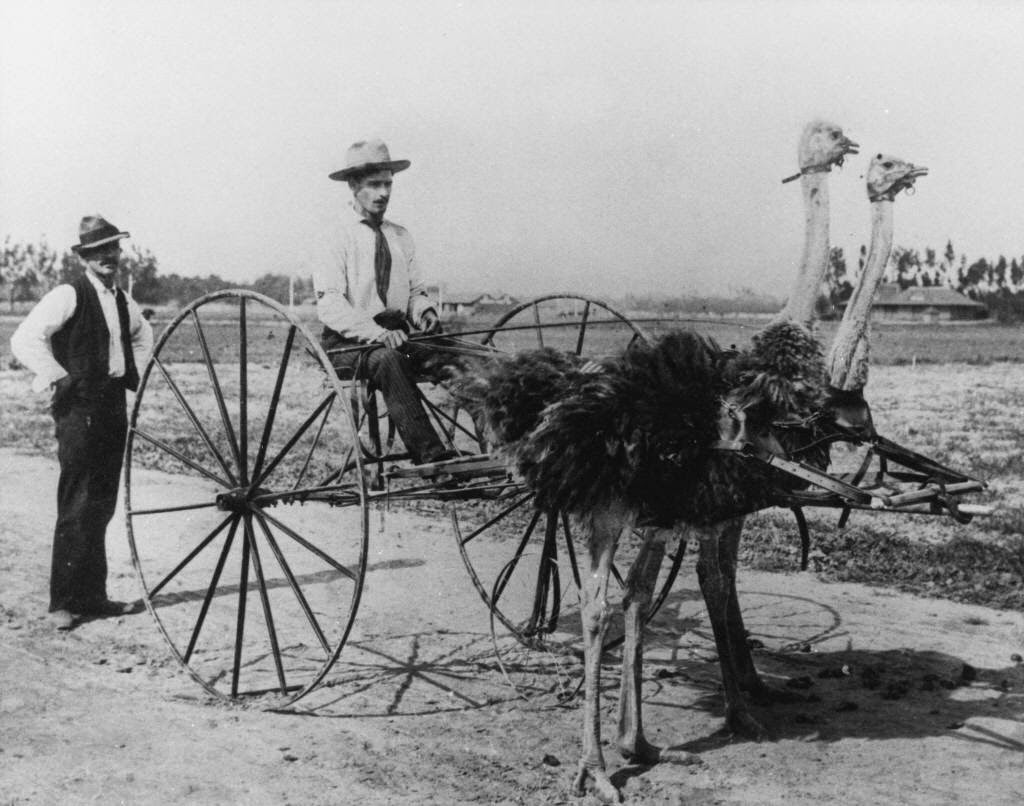 MAIL BY OSTRICH!-- In this photo you will see Anaheim barber, Willard A. Frantz standing next to a cart and R.F.D. (Rural Free Delivery) postman Frank Eastman in cart on a dirt road, drawn by pair of harnessed ostriches named Napoleon and Josephine. (1896) 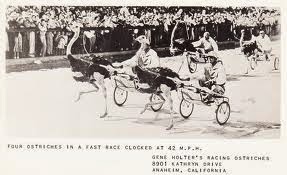 And let us not forget animal trainer, Gene Holter and his ostrich races. I found many advertisements in archived magazines and books for his many races of ostriches in Anaheim, and all over.

Apparently he had his farm at 8901 Kathryn Drive in Anaheim for a while. (Note: There are two streets with that name, one being spelled Kathryn and the other Catherine. I know, because I grew up on Catherine Drive in Anaheim, too.) It appears as if his races were during the 1950s and 60s.

Well there you have it folks, a brief but educational glimpse into Anaheim's past and it's strange intrigue over ostriches!