The Mysterious Death of Paul Whitice

Tomorrow is the 102nd anniversary of the death of young bride, Enid Rimpau. Her death left a tragic stain on the historic colony district in Anaheim that is remembered each year at this time. Because of the odd circumstances and strange similarities that both Enid's death and that of another gentleman, Paul Whitice, who died 12 years later, I chose to write this blog tonight.

In Enid's case, she died from poisoning on October 17, 1915, after only three months of marriage to Theodore Robert Rimpau, the grandson of Anaheim Pioneer Theodore Rimpau. Robert, as he chose to be called, was smitten by the young Enid, and courted her until she accepted his proposal of marriage. Enid had just divorced her first husband, Charles Stone, because of his "intemperate habits," and had been working two jobs to support herself on her own. She had moved to Anaheim to start over, and it seemed that everything was working out until that Sunday afternoon, just after church, when her husband claimed he found her dying of poison in her bedroom.

Family members came to the house, as well as Dr. Truxaw who came immediately when he was called. Unfortunately, the doctor saw that Enid was beyond help, and so Enid died there at her home on 503 Zeyn Street in Anaheim. The story in the papers stated a note was found, and that because of this there was no inquest into her death (even though there was no mention of anyone having checked to see if the note was even in her own handwriting). And so it was accepted that Enid had committed suicide. Still, there have been those who believe that she did not kill herself, and that she might have been poisoned on purpose. I went over her story inch by inch in my latest book, "Stories of the Forgotten: Infamous, Famous & Unremembered," 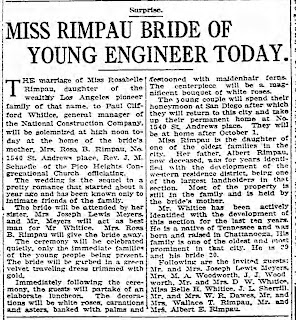 In regards to Paul Whitice, he too died suddenly and suspiciously. He was also a divorcee, previously married to Alice Marxmuller in 1911; However, in August of 1916, he remarried, this time to Robert Rimpau's cousin, Rosabelle Rimpau. I was recently contacted by someone who just purchased Paul & Rosabelle's first home in Los Angeles. The new owner, John Wray, is currently doing research on the history of the home itself and the Whitice family and sought me out for help in putting Paul's life events together. 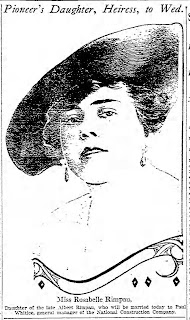 Years ago, a random commentor had left a message on my blog about Enid Rimpau's death, claiming that hers was not the only suspicious poisoning in the Rimpau family, insinuating that perhaps someone within that family may have been involved in foul play in both deaths. I looked into the story myself and I have to say there are some similarities, as I will detail below.

For one, both Enid and Paul were both previously married prior to marrying into the Rimpau family.  The Rimpau's were devout Catholics. In fact, many church services had been performed in patriarch Theodore Rimpau's home, back in Anaheim's early days, before St. Boniface had been constructed. Still the idea that one of the Rimpau's poisoned both Enid and Paul is reaching. I won't say that it isn't possible, but the question remains "why?"--

Well, one could argue that because both Enid and Paul were both married before, that perhaps their marriage into the Rimpau family tarnished the prestigious Anaheim family's good name. Again, that is just speculation. But it is a known fact that divorce was frowned upon, especially during that time in our past. But, Paul didn't die months after his marriage, like Enid did. He died nearly 11 years later. So that theory that both were poisoned because of their prior marriages does not fit.

Let's look into Paul's life a little further before I get to the details surrounding his death.

Paul was born on July 10, 1887 in Ridgedale, Chattanooga, Tennessee to parents Sarah and R.D. Whitice. By 1910, the family was listed in the U.S. Census as living at 1570 W. 17th Street, in Los Angeles. At that time, Paul was 22 years old, and working as a foreman at a building company, more than likely the same place his father was working, as a contractor. On March 20, 1911, Paul married Alice Marxmuller in Orange County, California. She was 22 years old, and a native of Kentucky, while Paul erroneously listed his age as 28 (he was only 24).  At some point he divorced Alice, although I could not locate the date of their dissolution decree.

By August 10, 1916,  Paul was wed once again, this time to Rosabelle Rimpau. The wedding was quite an affair and the newspapers mention they spent their honeymoon in San Diego. In 1916, Paul built had their first home built on Westchester Place, in Los Angeles but within a year the bank foreclosed on it.

Paul is mentioned in vital records again, in 1917-1918 for the U.S. Draft Registry records, where he listed his address in Prescott, Arizona, only to cross that address out and add his mother-in-law's address at 1540 N. St. Andrews Place in Los Angeles. Paul was still listed as living with Rosabelle's mother even up until the 1920 Census.  John Wray shared with me that he discovered Paul had some legal troubles even after Paul's home had been foreclosed on at Westchester Place in 1917. In fact, according John's research, Paul had filed for bankruptcy in 1918, after creditors were still hounding him for his debts. During the 1920's he moved his family (which now consisted of one daughter and later a son), around a lot. Paul had moved at least 3 or 4 times between 1921-1927.

When researching Paul's career,  I found that he continued his involvement in architecture and real estate construction.  I found several homes in Beverly Hills, Los Angeles and Los Feliz that bear his name as either architect, builder or both.

On July 4, 1927, Paul would be found dead in his home at 6517 Country Club Drive in Los Angeles. The newspaper reported that he had played too much Sunday golf and that it was a strain on his weak heart that did him in.  Paul was only 40 years old, and according to the paper his wife claimed he had been a sufferer of health problems for a while.

The newspapers did not fail to mention the fact that there was a poison bottle found in the bathroom, which started rumors that he might have committed suicide. There is no mention of an inquest or an autopsy, just that the "Police and coroner therefore decided that he died from organic trouble."

There is no further mention as to whether or not anyone contacted Paul's past physicians to verify whether or not he truly suffered from heart related ailments, so all we can go by is the official records filed with the county, that he died from natural causes. But was that really the case?


So what do you think?

Is it possible that Paul was depressed and chose to end his life by way of poisoning himself?

Poison usually is the preferred choice of women, not men. And what would be the reason for him to take his own life? Was he having legal or financial troubles again? Was his marriage on the rocks?

And if he did commit suicide, did Rosabelle or her family pay off the police and coroner so they would rule it a natural death to avoid any scandal?

Is it possible that Paul didn't kill himself but instead was poisoned, and the whole thing was covered up?

Then you must ask yourself, who would have a motive to do this? And why?

Or could the simpler answer, that he died from heart failure, be the right answer all along?

I will leave that for you to decide.

Thank you to John Marshall and John Wray!