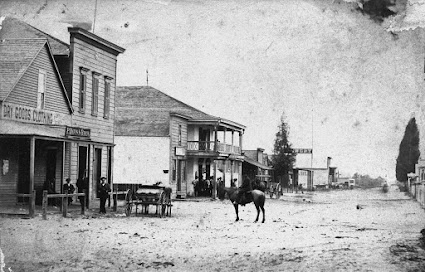 By: J’aime Rubio
A somber event in early Anaheim history is the long forgotten story of death of Marshall Charles Lehman. Born in Danzig, Prussia in 1827, by his early 40’s he found his way to the Anaheim area. The census records for 1870 show Charles living with his young wife, Caroline, 18, and their one-year-old daughter, Emily. At the time that the census was taken, Charles listed his trade as a carpenter.
By 1871, Charles decided to run for the town Marshall, and his election campaign pit him against another fellow lawman, David Davies. While fighting over the seat as town Marshall, the two began a feud so bad that the newspapers covered it, and Davies had threatened to kill Lehman if he won. By May 6, 1872, the election was over, and Charles Lehman was the last man standing, having been duly elected to serve the public as an officer of the law. Only two months into his term, Marshall Lehman would meet a tragic end that to this day has never truly been solved.
On July 21, 1872, at around 6 p.m., Marshall Lehman was called to Samuel Goldstein’s saloon, the Anaheim Brewery to stop an altercation that was taking place out back. According to the newspapers of the time, David Davies and another man, only known as Horton, had been playing cards in the brewery when a fight ensued over who won. During the fight, Horton managed to reach over and steal Davies’ pistol and then began shooting at him. That was when the fight was taken outside to the vacant lot between the brewery and Macy’s harness shop. It was around that time that Marshall Lehman arrived to intercede in the melee, but was fatally wounded when the pistol discharged, piercing Lehman’s abdomen, through his liver and lodging near his spinal column. He was rushed to Dr. Higgins’ drug store and later was moved to Mrs. Brown’s residence nearby where he remained until his death two days later.
Prior to his passing, Lehman was adamant that it was Davies who had shot him, not Horton, despite the fact that the authorities had originally believed Horton had fired the fatal shot. After the Marshall had been wounded, Horton had made a run for it, hiding out in the Lorenz vineyard where he was eventually caught. Both Davies and Horton were taken to jail, and held on $5,000 bonds. Davies being charged with “murder”, while Horton was charged with “assault with intent to commit murder.”
After a jury in Los Angeles acquitted Davies on all charges, he returned to Anaheim and took over as the town Marshall. Horton, was never charged for the murder of Charles Lehman leaving the entire case officially unsolved. Another strange thing to note about this story is the rumor that spread over time that Marshall Lehman had, on his death bed, gave his infant daughter away to the unmarried daughter of his friend, Vicenta Carillo claiming that his wife was too young to care for their child.
According to the census records, the Lehman’s had one daughter, Emily who was born around 1869. But according to stories passed down for years, it was an infant daughter, Mary who was given to Vincenta Carillo’s daughter. Edelfrida Carillo, the unmarried daughter mentioned, was only 18 years old when Marshall Lehman died, while his wife Caroline was 20 years old. The only connection I could find between the two families is that they were literally next door neighbors, so I assume the families were close.
Still, the question remains, why would Marshall Lehman give away his young child to the next door neighbor’s unmarried daughter, who was still just a child herself? Also, was Emily and Mary the same child or were they two completely different children? If so, what happened to Emily? And could that have contributed to Marshall Lehman’s choice to give Mary away to his neighbors? So many questions, so little answers to find. 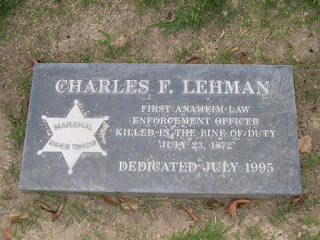 Marshall Charles Lehman’s grave can be found in the Pioneer Section of the historic Anaheim Cemetery, towards the back near the original entrance. Originally just a wooden marker was all that was left to remember him by, but over time the elements had even destroyed that, leaving Lehman’s final resting place an unmarked spot in the cemetery for over 100 years. Thankfully, in 1996, he was given the honor that should have been afforded to him over 124 years prior, a proper marker for his grave. Now you can visit Marshall Lehman, and pay him his respects, the first law officer in Anaheim to die in the line of duty.
(Copyright, J'aime Rubio, 2018, Originally published in Annual Newsletter for the "Anaheim Historical Society, Circa 2018)
Sources:
United States Census, 1870
Marysville Daily Appeal (July 18, 1872; July 25, 1872)
Sac Daily Union (July 23, 1872)
Daily Alta California (July 23, 1872)
Southern Californian (July 27, 1872)
Orange County Register (July 23, 1996)
Photo Credit: Findagrave & APL Archives