A Missing Son, A Lost Soldier

According to the May 28, 1914 edition of the Los Angeles Herald, a missing young man from Anaheim was finally found under sad circumstances. To explain it all, I must start from the beginning.

John Klassen was born to parents P.M. Klassen and Elizabeth Buller Klassen, both residents of Anaheim, but originally native of Germany. From a young age Johnny had dreams and ambitions to join the military, so when he finally became a young man that was all he thought of.

The newspaper doesn't give specifics on why he couldn't enlist prior but only that he was previously "prevented from enlisting because of his youth".  Could it have been his parents who didn't want him to go? For the newspaper stated he was 19 when he left.

No matter what the case, Johnny ran away to fulfill his dream and enlist in the Army, but when he got there he enlisted under a false name, John King.  Not knowing where he went and why, his parents were distraught over the disappearance of their son and searched endlessly, looking for him.

Meanwhile, in San Francisco, Johnny was waiting to be sent to the front lines. At one point he wrote his mother a letter telling her that he was in the Army and that he was okay, but he failed to mention that he was listed under a different name. So when his mother wrote him back, she was notified that there was no one enlisted under her son's name. Shocked and devastated, she started to look for him once more.

Eventually Mrs. Klassen was able to track down her son's whereabouts, but sadly it was too late. Johnny had died in the Army hospital in San Francisco. Apparently, he fell ill while he was waiting to be sent out to the war, never being able to fulfill his lifelong dream of being in the Army.

He was buried at the San Francisco National Cemetery at the Presidio.

This will be the first of many new types of posts on this particular blog. I have decided that it was time to give a platform to various residents (and former residents) who lived and breathed Anaheim history between the 1950's and 1960's growing up there. For my first contributor's post, I have chosen to share the memory John Lazenby, an Anaheim High School Alumni (Class of 1965) who recalls his memories of the famous custom car guru, Stan Betz. Enjoy!

Moving to Anaheim in 1956 from Santa Ana, like all 9 year old boys, I was fascinated with my new surroundings.  A new school, Horace Mann, new friends, and of course new adventures that would unfold.

I use to love to build model aircraft, especially model cars, on our patio during the summer.  There was a transistor radio that would be out there with me and the stations of choice were KFWB and KRLA. I always had a Bubble-Up or Pepsi Cola at my side.  I knew all of the songs that came across the air waves because of my love for music, and of course all of the DJs.  To this day I still have my KFWB Disc / Coveries Album with the "Seven Swingin’ Gentlemen."

Places I would buy AMT car models were Sav-On Drugs, and then there was Tiny’s Hobby Shop located in the Pickwick Hotel on Los Angeles Street just north of the City Library in Anaheim.  Tiny was just the opposite of his name being a rather rotund gentleman who sat in a chair and didn’t move much. What was really neat is that Tiny had model entries for awards that any kid, or I guess any adult, could participate in.  On a regular basis I would enter one of my efforts and occasionally win something.  A couple of those models are still with me in boxes all these years later.

The challenge was how to get to Tiny’s from my home which was probably a couple of miles away.  I had a bike but the agreement with my parents was that I would not ride that far, as they worried about me in traffic, which is hard to imagine what it was like then versus today.

Well of course, the temptation was too great and I had to get on the bike and make the journey.  I figured out what back streets to take to avoid as much danger as my young brain would muster up.  The final part of that trip would be heading down Chestnut St. towards Los Angeles St. which was the north corner of the Pickwick. What always struck me was a hot rod with louvers parked on the street just west of the bus stop on the back side of the Pickwick.  On occasion there was a fellow with white bib overalls sitting on the curb mixing paint.  He had the stuff all over himself and of course the curb and street.

The more interesting thing about all of this was he had a “peg” leg with a rubber boot or cap on the end sticking out of one of the pant legs.  I would always stop, say hello, and admire the car and ask questions about what he was doing.  This was none other than Stan Betz, who at that time I thought to be an older guy, and I guess he was compared to me.  I never had the courage to ask about the leg but years later learned the story of how he ended up that way.  Also, I never realized then that he was a life long Anaheim resident and AHS grad.

Once my days of visiting Tiny’s ended, on occasion I would bump into Stan and different places and he always remembered me.  I had a friend that owned a sign shop in Orange and Stan was his neighbor so we would go over and look at his movie props.  Over the years he had acquired many of them, and some were historically significant in the movie industry.

My last visit with Stan was at the AHS car show where I had one of my cars.  Stan was getting up there in years, and not quite as mobile, but he still got around and his mind was sharp.  Then in September of 2017, I learned of his passing and was sad, but on the same note was happy that I’d got to know him as a person and appreciate what a talented gentleman and classy act he really was.  Godspeed Stan, many miss you."- John Lazenby.

NOTE: "The two photos attached are of my '63 VW sedan parked on Chestnut St. in the exact spot Stan would sit and mix paint.  The other photo is also on Chestnut St. at the Der Kleiner Panzer second club house located in the Pickwick Hotel.  That is me with the burgundy cords on at the front door.  Both photos were taken very late 1971 or early 1972."

To read more about Stan Betz and his contribution to Anaheim history please check out this article on the Anaheim High School Alumni Association's website:
http://www.anaheimcolonists.com/stan-betz/

Posted by J'aime Rubio, Author at 1:57 PM No comments: 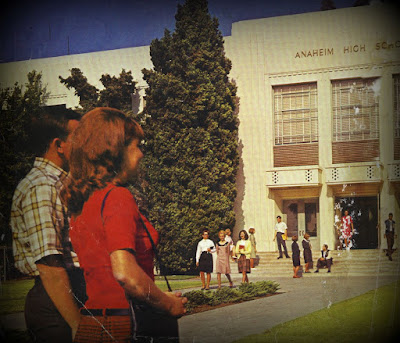 Hey everyone! I am going to be doing something new on this blog. I will still continue to post my historical research and stories involving early Anaheim history, but I am also going to be dedicating one section of this blog entirely to memories shared by various people who grew up here, attended high school (be it Anaheim High or Loara High) and/or all those fun times that were had at places such as the Bean Hut, Harmony Park and other locations during the 1950's and 1960's.

Whether it's a childhood memory, or teenage memories from school or summer months. I am happy to announce that I will be sharing those stories with you by way of contributor's posts.

If you would like to share a short story/memory of your days in Anaheim, please contact me via my website www.jaimerubiowriter.com. I look forward to sharing Anaheim memories with all of you, so that we can preserve these stories for the future generations to look back on and appreciate.