Love and Marriage- The Schmidt & Langenberger Scandal of Anaheim

What would you do for love? Many people may say, "anything," if one is truly in love. However, the standards of today were not acceptable a hundred years ago, or even 140 years ago. If one loved someone, and the person they loved was married, back then you kept it to yourself, unless you wanted to cause a scandal and bring reproach to your name, or the name of your family. For Augustus Langenberger, I guess love was all that mattered, and he created one heck of a scandal back in the early 1870s, shortly after the death of his first wife, Petra.

Augustus Langenberger came to the United States from Germany in 1849, settling in what would later become Anaheim. At the time, the land belonged to Juan Pacifico Ontiveros and it was called "Rancho de Cajon de Santa Ana." In 1850, Augustus married Juan Ontiveros' daughter, Petra. He also became the very first merchant in Anaheim's history. In 1857, Juan Ontiveros sold 1,160 acres of his land to George Hansen, who wanted to set up a German colony for the Los Angeles Vineyard Society. Within that group of new colonists was the Schmidt family, Theodore and Clementine. Several historical books claim that it was Theodore Schmidt who came up with the idea to name the town, Anaheim.

Theodore Schmidt was a native of Prussia, who came to the United States in 1848. He married his wife, Clementine (or Clementina) in June of 1859 in San Francisco. They were the parents of five children: Theodore Edward Schmidt, Jr., Clementine, Frances Emily, Rose Amanda, and William Frederick.

It is uncertain when Augustus was struck with his infatuation or "love-sickness" for Clementine, but it was very apparent shortly after the death of his wife, Petra.  In July of 1867, Petra gave birth to a son which soon died. "Infant" Langenberger was the very first burial in what is the Anaheim Cemetery on Sycamore Street in Anaheim. Within two months, Petra grew ill and also passed away on September 7, 1867. She was the second burial in the cemetery. Her husband August gave her a meager wooden cross to mark his symbol of love, or possibly lack thereof, for his wife.

Augustus Langenberger had money, his original residence was located on San Pedro Street, which later became 124 West Center Street between Los Angeles and Lemon Streets.  It was a 12-room adobe structure which acted as a residence, a bank, a general mercantile store and the Wells Fargo Express office for Anaheim.  It also acted as the primary trading post in between Mission San Juan Capistrano and Mission San Gabriel.  That structure stood until 1919, when it was demolished.

With all that Augustus had, it was not enough, he wanted Clementine for himself. At one point he decided to name some of his land after his love-- not his deceased wife, but another man's wife, Clementine Schmidt.  Whether there were any physical improprieties committed between the two, or perhaps Clementine was flattered by the attention, it still caused quite the scandal at the time. It became so bad in fact that her husband Theodore Schmidt tried to win back his wife's affections by buying her land, giving her extravagant gifts and money, to no avail. Clementine had enough of her marriage to Theodore Schmidt and wanted a divorce. Schmidt had enough, and moved to New York, leaving Clementine to do as she pleased. By 1873, Clementine had filed for and received a divorce decree and by 1874, she was Augustus' bride.

That same year, Clementine's 13 year old son, Theodore Jr., died from what was said to have been an accidental gunshot wound. Thanks to the great detective work of John Marshall, a fellow member of our History of Anaheim Facebook Group, he put the pieces together, finding out the cause of Theodore, Jr.'s death. According to the newspaper of the time, on February 9, 1874, Theodore Edward Schmidt, Jr., was out hunting with friends at the Bolsa Chica Rancho when he attempted to shoot a hare from inside of a wagon. The "hammer (of his gun) caught on the seat of the wagon, and fell on the cap, exploding the charge, which entered behind the ear." He died a very gruesome death, instantly.

Back to the story,- Augustus and Clementine lived out the remainder of their lives together at the residence they called "Villa Mon Plaisir" or the "House of My Pleasure." Seems rather fitting since the two of them were very bold in getting what they wanted,  no matter what obstacles stood in front of them. Their home was one of Anaheim's most beautiful, situated on Clementine and Sycamore Streets, surrounded by orange groves, where Pearson Park stands today. 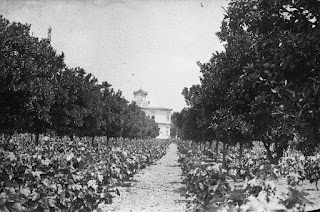 Augustus passed away on April 3, 1895 and was interred in the elaborate Langenberger family mausoleum in the Anaheim Cemetery. Clementine lived another eighteen years, finally passing away on October 8, 1913. There is a memorial plaque on the mausoleum that has the dates 1849-1915, however those dates are incorrect according to Anaheim Cemetery records.

I guess we will never know how the relationship between Clementine and Augustus ended up on a personal level. Did they get the happy ending they both wanted? Was everything worth it in the end?  Again, we may never know. From records and photographs the pair appeared to be happy, even into their older years.

Still, I cannot help but feel sorry for Theodore Schmidt and of course, Petra. The fact that Augustus didn't bother to erect a beautiful mausoleum for his first wife, but only erected a wooden cross, (not even a monument or fancy headstone), makes me feel even more sad for Petra. Instead, he names land after Clementine and eventually the pair end up in one of the finest private mausoleums in the cemetery, just feet away from Petra's meager grave.  Over the years Petra's headstone rotted until it was eventually nonexistent. By the 1970s, Mother Colony Household had a plaque put in place for Petra, and now she has a proper marker so that she can never be forgotten again.

All photos from Calisphere via Anaheim Public Library Archives (for educational purposes only).