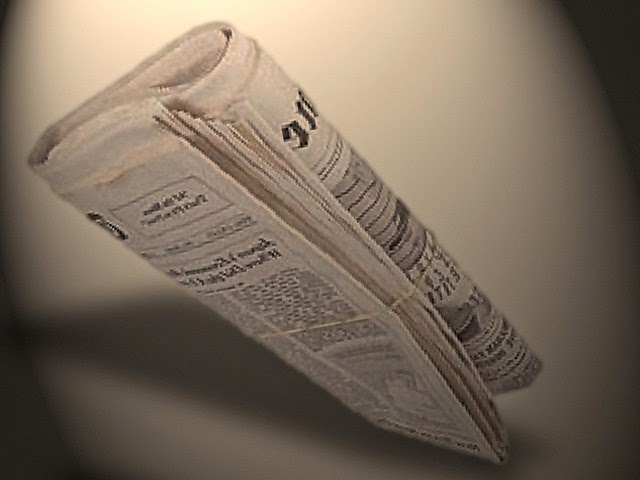 
In September of 1870, G.W. Barter of the firm Hamilton & Barter, which were publishing the "Daily Star", retired from his post there and started his own paper, the "Anaheim Gazette." He bought the old press from the "Star" which had originally came from the "Wilmington Journal" as well....this press was ancient but worked and got the paper going. Sadly, in 1877, the original building for the "Gazette" burned down and with it went it's old press.

The first Anaheim High School, Circa 1901. Quoted from the Anaheim Public Library archives, it states: "Anaheim High School, built in 1901, the first high school built in Anaheim district and third in Orange County; located at 608 W. Center Street (later Lincoln Ave.); sold to the elementary school district in 1911; demolished 1937 and became site of Fremont Junior High School, which closed in 1979 and was demolished in 1980." 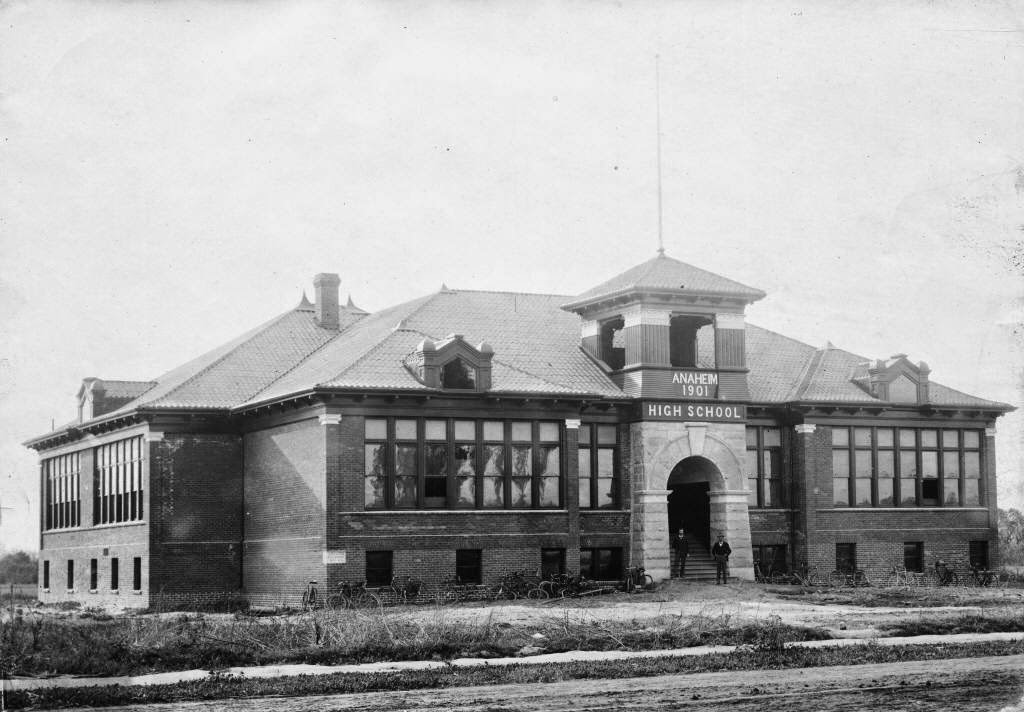 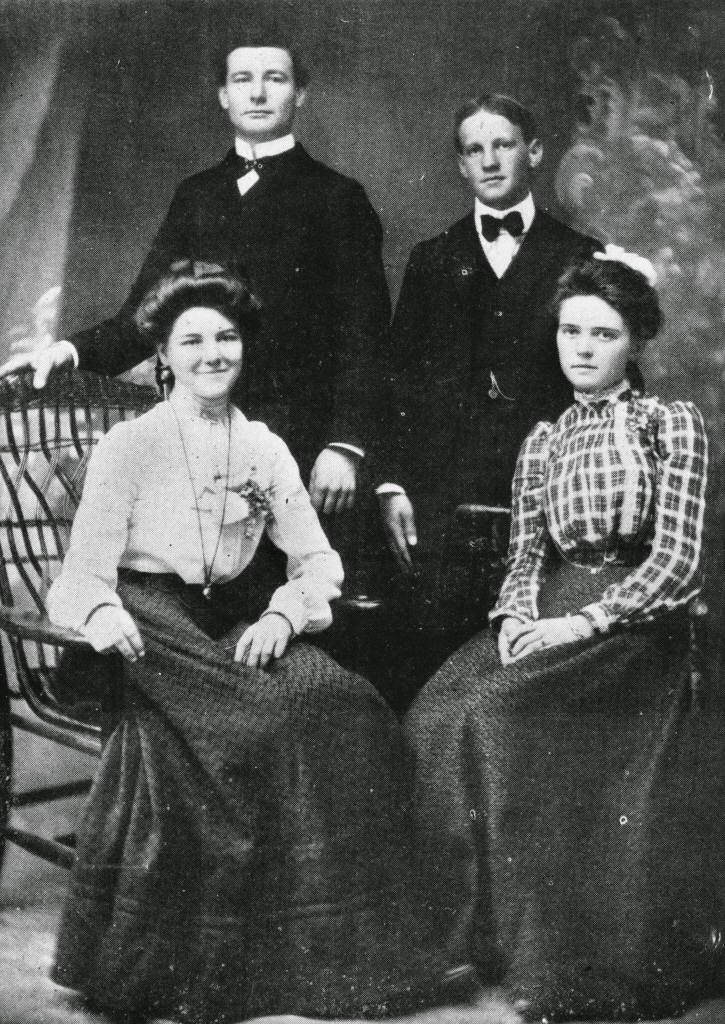 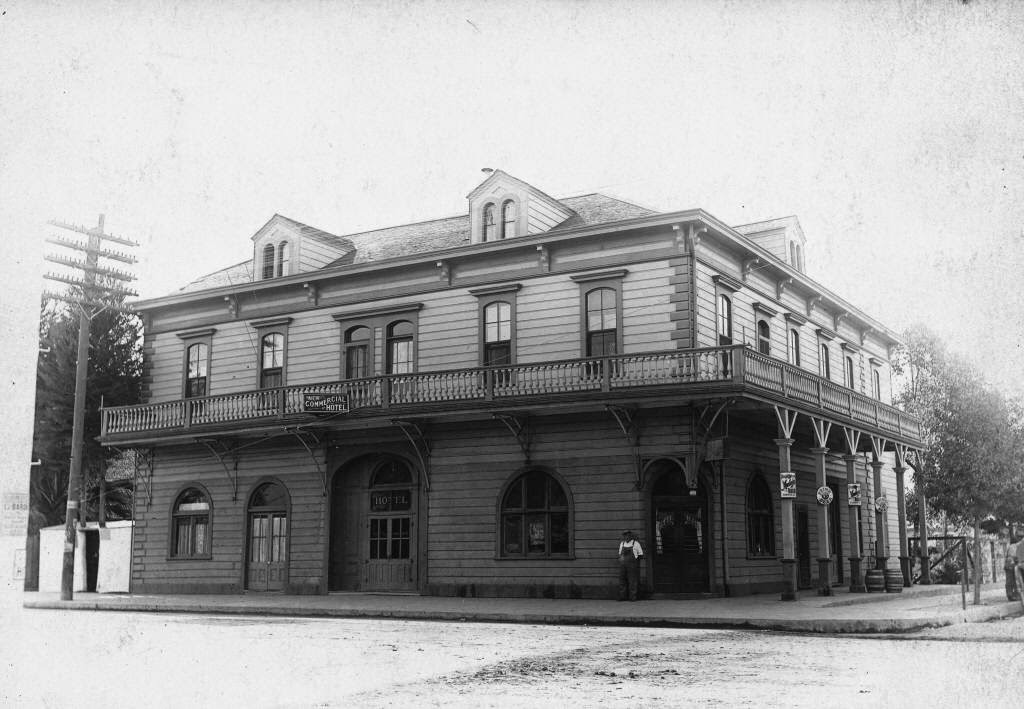 The Commercial Hotel, located at 182 West Center Street (now Lincoln Avenue) at the corner of Lemon Street. It was originally known as the Anaheim Hotel, built by Henry Kroeger (2nd Mayor of Anaheim). When Max Nebelung purchased the hotel in the late 1890s, he changed the name to the Commercial Hotel. (Photo Circa 1915; APL Archives)

History Of The Woelke-Stoffel House

If you have ever driven past this house on West Street in Anaheim, I am sure it has caught your eye. You may have even wondered about who might have lived in this house such a long time ago. You may have even recalled the time when people referred to it as the "Red Cross House," however this home is actually called the "Woelke-Stoffel House." Named after two of it's owners, John Gottlieb Woelke and Peter Stoffel, this home is one of the most beautiful Queen Anne designs in architecture that Anaheim has ever seen.


Born in Germany around 1838, John Gottlieb Woelke immigrated to the United States with his wife and family in 1878.  He became a naturalized citizen on August 23, 1888 in Chicago, Illinois. While in Chicago, he became a successful restauranteur. By 1894, John had moved to Anaheim, bringing with him his wife Anna Wilhelmina Hopp Woelke, his mother Caroline Woelke and his children. When he came to Anaheim, he purchased the property on the southwest corner of what was West Center Street and Palm (which would be Lincoln and Harbor streets today).

The home was designed by architect, George Franklin Barber, and the building of it was overseen by contractor, Armstrong Davis Porter in 1896. It was stated that during the building of the home, the family lived in a barn that was constructed on the property. The Woelke family lived in the home at 524 W. Center Street, for several years before moving to Los Angeles in 1899.


After selling the home, John purchased the Hotel Argyle in Los Angeles, which was located on Bunker Hill on the corner of Olive and 2nd streets. Sadly, by June of 1906 a terrible fire swept through the Hotel Argyle and because of insufficient fire escapes in the building, (which John had been cited for prior to the fire), he was held accountable and was fined. His insurance did pay for the repairs which was estimated at $1,500.00 in damages. By December of 1906, only a few months later, John Woelke died of a sudden hemorrhage. He was instructing his painters at the current site of his new home on 3rd Avenue, when he fell down and began having a seizure. He died within a few minutes, which was later determined to be a brain hemorrhage. He was 68 years old.

The Lyons Family & Other Owners

In 1899, when John had left Anaheim, he sold the home to Isaac Lyons, the proprietor of Lyons Hardware Store that was located in the Metz Building on the corner of Los Angeles St (Anaheim Blvd) and Center St (Lincoln). Lyons was a native of England who came to California in 1862. Lyons lived in the home with his family from 1899 to 1904 when he sold the house to another family, the Michod's. They lived there from 1904 to 1907 and then sold the home to another family, Olmstead's. This family would only live there for less than a year before Peter Stoffel and his family would buy it, and make this house their home in 1907.

Peter Stoffel was born in 1865, in Luxenbourg and he immigrated to the United States in 1890. He moved to Kansas and married his wife Mary-Elizabeth and settled there for several years, raising a family. He later moved to Anaheim, purchased the home on Center street and became a very successful citrus farmer and lived there the rest of his life. It wasn't until Peter's wife died, that the family estate sold the property to John Dwyer when the city had planned to demolish it.

John Dwyer's first wife, Marie Horstmann was from Anaheim's first families that settled there. It is said that she was the first baby born in Anaheim from the colonists families. She set aside some of her family land located on West Street in order to secure a spot for Anaheim's history to be preserved.  In the late 1920s when the Hansen House (or "Mother Colony House") was going to be demolished, Marie Horstmann Dwyer was the one to make sure it would be moved to her family property on West Street. After Marie died, and when the Woelke-Stoffel house faced the same possible demolition in 1949, John Dwyer bought the home and moved it right next to the Hansen House on their property.  By 1953, the home was then donated to the Red Cross to be used, where they kept the property until the home was officially sold to the City of Anaheim in 2006. It was re-dedicated in 2008 and part of what is now known as "Founder's Park."

This home has seen many faces, has been a home to many families and also one of historical significance. It has been a museum and a wonderful place that thousands of children have visited on field trips for decades to learn about our town's earlier days. This home is a piece of Anaheim history, and one so well loved by Anaheim's citizens. This is a place that I hope remains open for future generations to learn about this town's wonderful history and all the people who made Anaheim a literal "home by the river." --

UPDATE: Since I had published this story back in 2014, I noticed a website known as "Backpackerverse" posted their own completely fabricated story about this historical treasure. Let me make this clear, the house is not haunted and there is definitely no evil spirits in the home. I have been in contact with Cynthia Ward who has been a longstanding volunteer at the house as well as one of Anaheim's best historians. If she says its not haunted, please take her word for it. Thanks

Posted by J'aime Rubio, Author at 3:57 AM No comments: