Who Was Abel Stearns? 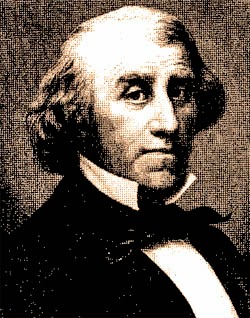 Although Abel Stearns did not live in Anaheim, he owned most of the land surrounding it. His story is one that is part of Orange County history as well as Anaheim history because later decisions and choices he made directly affected Anaheim for a period of time.

A native of Massachusetts, Abel Stearns was born to parents Levi and Elizabeth Stearns in 1798. Both Stearns' parents were descendants of the Old English families who immigrated to the U.S. in the 1600s. According to author Phil Brigandi, Stearns was orphaned at the age of 12, where he became a sailor and traveled the seas eventually ending up in Mexico where he gained his Mexican Citizenship there. This was a key factor in his success when he moved to Los Angeles and became one of the biggest land owners in Southern California.

By 1831, Stearns had a warehouse at the port of San Pedro, his own stage coach line that ran from San Pedro to the pueblo at Los Angeles and he also had a 3-story Flour Mill on N. Spring Street in Los Angeles. It was said that in 1835, after an altercation over a keg of brandy, Stearns was stabbed in the face with a knife, permanently disfiguring his face. People often made jokes about his appearance as being "Caro de Caballo" (horse face) when he wasn't around.

Although he had some set backs, it did not stop him from becoming one of the richest and successful men in the area. It appeared as if he wasn't content with the empire he was slowly growing, so in 1842, Stearns made a huge purchase of Rancho Los Alamitos (28,000 acres).

As time went on he continued to purchase many ranchos, one by one. Eventually acquiring so many that by 1860, he was considered the most important land owner in Southern California. One of the ranchos purchased by Stearns was that of Rancho San Juan Cajon de Santa Ana which surrounded Anaheim. Although Juan Pacifico Ontiveras broke off and  sold 1,165 acres of the the same rancho to George Hansen for the Anaheim Colony, Abel Stearns bought up most of the acreage surrounding Anaheim, a whole 21,000 acres of it. At his peak, Stearns owned 200,000 acres of Los Angeles County, making his the biggest "Land-and-Cattle Empire in California" (quoted by Historian, Robert Glass Cleland.)

Besides being a merchant and land owner, Stearns was involved in politics as well, having served as a member of the Los Angeles Common Council, representing California as a State Assemblyman and being the Supervisor of Los Angeles County as well.

Unfortunately, Stearns was remembered for not only his accomplishments, but also his mistakes. Known for being a very difficult businessman, Stearns made a lot of enemies. It appears that Stearns was quick to foreclose on people who owed him debts. It almost appears as if he might have loaned money knowing that the person or persons could not make the payments, so he would collect any way he could. Mostly, a lawsuit would ensue and he would seize the persons land or any valuable property. This continued for a very long time, giving Stearns a not-so-nice reputation.

During the Gold Rush, Stearns was making a pretty penny off of the miners up north who needed to be fed. Cattle owned by Stearns went from selling for $4 for their hide and tallow, to selling them for $75 on the hoof a piece. Unfortunately, as the Gold Rush dwindled down, so did the demand for beef, but Stearns was spending more than he was taking in. As he continued to hold a bad reputation for being unreasonable with people who owed him debts, suddenly he became the debtor and the tables turned for him. To make matters worse, the drought of  1863-1864 the land had become dry, the cattle died from lack of water and food and this plummeted Stearns deeper into debt.

By 1865, Michael Reese forced Stearns to sell his favorite piece of land, Rancho Los Alamitos. The $20,000 debt Stearns owed Reese gave Stearns no other choice but to hand over the very first and most favorite ranch he had bought. As time went on, Stearns grew more and more desperate to secure cash and would mortgage the other Ranchos he owned just to support his lifestyle. Eventually, all that money ran out and more of his land was now owned by his debt collectors.

When it seemed like there was no way out, in came Alfred Robinson.  Robinson was an old friend and business associate of Stearns and he took the opportunity to make a deal with Stearns to buy and help sell his existing Ranchos. Along with four other partners, Robinson would form the Robinson Trust, which came to be a very prosperous real estate firm. 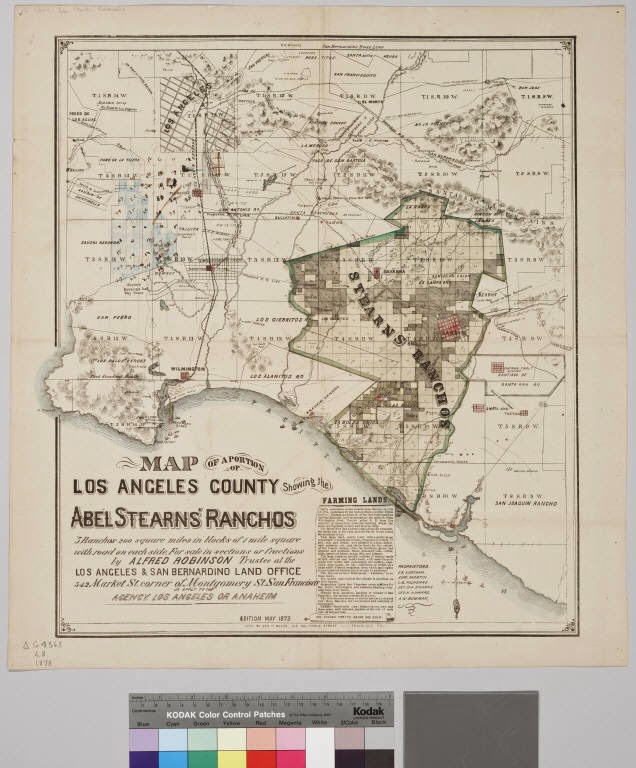 It should have been a great business deal, right? Well, unfortunately Stearns didn't follow through on his end of the bargain. After the deal was made, Robinson Trust (managed by: Alfred Robinson, Charles Polhemus, Edward Northam, Edward Martin and Sam Brannan) had a difficult time selling the property because Stearns continued to act as if the land belonged to him. He continued to rent land for animals (particularly cattle, horses and sheep) to graze on and made arrangements to sell the property on his own and at his own price, instead of letting the firm sell it. If that wasn't bad enough, Stearns tried to rent out portions of the San Juan Cajon de Santa Ana Rancho that no longer belonged to him. He also rented out other pieces of land he had deeded away, and took money at 10 cents per head of sheep to graze all season. For the areas surrounding the Anaheim colony this would have been terrible, as the sheep were eating all the grass to its roots, leaving the land barren and undesirable.  It seemed there was no end to the nightmare Stearns was causing Robinson, until August 23, 1871 when Abel Stearns died.

After Stearns death, the land surrounding the Anaheim Colony was quickly bought up and settled, allowing the area to flourish which also helped Anaheim itself flourish as well. Abel Stearns is buried at Calvary Cemetery in Los Angeles.