Sitting on Anaheim Boulevard, looking just as lovely as the day it was constructed, sits the Carnegie Building. Erected in 1908 and opened on New Year's Day of 1909, the Carnegie Building has withstood World War I, the Great Depression, the earthquake of '33, the flood of '38, World War II and so much more. It stands today as archaic reminder of the beauty and class that Anaheim and its residents once had. Designed by the Griffith Park Observatory architect, John Austin, and constructed by Kuechel and Rowley, the Carnegie Library shows a distinguished character that time cannot seem to diminish.

What many people do not know though, is that this was not the first library in Anaheim. Originally, Cornelius Bruce, proprietor of the Candy Kitchen that was once located at 106 East Center Street (now Lincoln Avenue), first offered the back of his store as the first Public Library in Anaheim. It acted as the Public Library for several years until the city decided it was time to expand.

It was not until 1906, when the city clerk of Anaheim sent a request to Andrew Carnegie, to secure funds to build Anaheim a proper library. It took around five months before Carnegie's secretary, James Bertram contacted Anaheim's city clerk with the good news. Upon agreeing to the terms of their grants, Anaheim was to receive $10,000 in order to build their beloved library.

After receiving monies collected by all of Anaheim's residents, the property located on the corner of Los Angeles Street and Broadway was purchased for $2,400.00 from owner, William Koenig. The groundbreaking and cornerstone laying of what would become the Carnegie Building and Anaheim's first official library was done on November 21, 1908.

By New Year's Day of 1909, the library was officially opened! 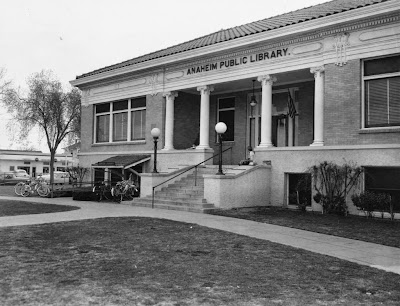 The Carnegie Building remained Anaheim's library for over fifty years, until it became obvious that the building was just not large enough to accommodate the need for more books and visitor access according to the expansion in Anaheim's population.

By 1962, the city had built the Elva Haskett Branch at 2560 West Broadway. Named after Elva Haskett, a library staff member hired in 1925 who later became Anaheim's first children's librarian. It seemed that one location was not enough for the city, so by December 5, 1963, the property that originally housed the Theodore Rimpau house, was now the new Central Public Library located at 500 West Broadway. The Carnegie Building later housed city offices and then later became the Anaheim Museum and now, MUZEO.

Although the Central Library hasn't been around as long as the Carnegie Building, it has seen it's share of Anaheim residents and has become a familiar site to both the older and younger generations alike.


From the meager beginnings in the back of a candy store, to a distinguished and most beautiful structure as the Carnegie Building and then finally an even larger, and more modern design, Anaheim's libraries are all very special in their own ways. Of course Cornelius Bruce's Candy Kitchen, now only exists in our imagination via the wonderful photos in the Anaheim Public Library archives, one can only imagine the fun it must have been!

My mother grew up in Anaheim in the late 50's and early 60's and the Carnegie Building was and still is a wonderful memory of her childhood. From reading the books, running around downstairs (barefoot) during the summer months with her friends, to enjoying the activities the library offered to the kids, this place will forever be sealed in her mind as a place of happy memories.

My own memories of the library as a child was going to the Central Library on Broadway, to check out a book or two, maybe even renting a VHS tape of Alice in Wonderland or Sleeping Beauty. I even recall watching Dumbo there once in the early 80s with my mom and the staff giving out popcorn. As an adult, my very first investigation into the death of Enid Rimpau led me to this very library to the upstairs room where Anaheim history was kept. My grandfather, George MacLaren (who was a member of the "Friends of the Library" and a former President of the Anaheim Historical Society), often referred me to the library whenever I had questions about any history related stories.

In the end, Anaheim's libraries may very well have been the catalyst that inspired me to become the investigative writer that I am. I have always been fond of books, and even more fond of history. I am very grateful that Anaheim has kept their records, photos and history archived for historians, such as myself, who continue to dig for more information on Anaheim's past.

It really comes full circle when you realize that Anaheim's libraries are not only a part of its history, but Anaheim's history is also very much part of Anaheim's Public Library!

All photos thanks to Anaheim Public Library Archive Collection!
Posted by J'aime Rubio, Author at 12:03 AM